Yes, This Is Real Life Part 8- A Place Most Exceedingly Rare 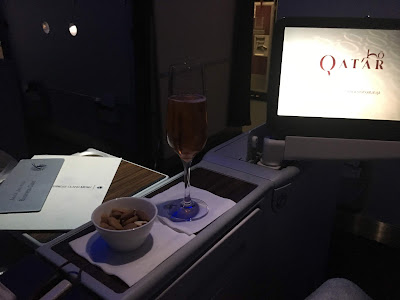 Yes, This Is Real Life- Preview

Yes, This Is Real Life Part 2- Brits In Beantown

Yes, This Is Real Life Part 3 - Shades On, Wheels Up

Yes, This Is Real Life Part 4 - Welcome to Ghost Port

Yes, This Is Real Life Part 5 - When You Layover During Ramadan

Yes, This Is Real Life Part 6 - Birds In Doha

Yes, This Is Real Life Part 7 - Dealing With Dragons

I have a pet peeve about the current state of IFE on many airlines.  Actually I have plenty, but this pithy one is relevant to my life currently.  That is that each time you want to watch a program-  no matter if it's a 3 hour movie, or a 22 minute TV show, you have to watch an intro with several segments.  There's usually one about the airline, and then some adds from whatever company they currently have a contract with.

Qatar takes this intro business seriously.  They currently have an add for a condo building/mall, and an add for the airline, as well as a full length add about Qatar itself.  The tag line is 'Qatar- A Place Most Exceedingly Rare,' which, when you watch it 20, 30, 40 times over a weekend makes you question their use of the English language.  I guess it sounds fancy, but what exactly does it mean?  Sure, this place by definition is rare-it's small, and until the currently diplomatic crisis, not many people knew where it was, but aside from that....?

They do a good job of giving it gravitas I suppose, but I personally think the prior incarnation of their propaganda video was better, and was possibly the best airline self promotion add I've ever seen.  I could watch it all day.


I landed back from Colombo safely around midnight.  It was a good flight, just over 5 hours.  I had the curry dish which, I kid you not, I have been thinking about since the last time I flew CMB-DOH.  It didn't disappoint.  After the meal, I fell asleep and woke up to the descent announcement.  I probably got around 3 hours of sleep, which was plenty to hold me over through the night.

What was notable about this trip was learning the changing visa situation for traveling to Qatar.  When I came through a year or so ago, there was just a simple paid visa on arrival that cost about $25.  This time, I had a few options, and used a different one by necessity each time.

First off, Qatar now has a free multiple entry visa for US (and many other) citizens.  This visa just requires proof of onward travel, and 6 months at a minimum left on your passport.  However, at the time I went on this trip, this wasn't yet the case, and so I was encouraged to check out some of the workarounds.  These workarounds, even though the visa is no longer the issue, are worth knowing about still as they're a great way to get free night's accommodation and sometimes more.

What program you qualify for depends on the length of your stopover, with a few other rules thrown in.  You qualify for their first program, the "Stopover package" or "STPC" if you are flying on Qatar in higher economy classes (N and above), business or first, have a layover of between 8 and 24 hours, and ....this is the kicker... there is NO SHORTER connection you could have taken, even if that connection would have had a different fare.  Certain close destinations (MCT and KWI) are also excluded.

Why these rules are so strict, is that this package gets you not only a night at a good hotel (5-star in the case of business and above, 3-star for econ), but also a sizable food and beverage voucher that pretty well covers your meals, and free airport transfers.  Not a bad deal at all.  I did this package on my third and final night of this trip...so I'll be giving the details soon.

The other program to know about, which is likely more useful to most people since it has far fewer restrictions, is the "+Qatar" program.  This basically is Qatar's way of trying to get people to spend some time in the city on their way through.

What Qatar is, at least to the limited outsider, is an oil and money drenched peninsula surrounded by desert and neighbors who currently don't like them very much.  What they have going for them, besides all that money that lets them turn this desert into architectural wonders (or eyesores, depending on your taste), is a truly world class airline and airport and they're painfully, painfully, proud of it.

In honesty, they should be.  I get that there's unfair advantage with their government throwing cash behind the investment, but everything, from the food, to the service, to the planes themselves is just a cut above most any other airline out there.  This is to say nothing of the airport, which is just beautiful start to finish.  They're so proud of it, that THIS VIDEO exists of the 'official song of Hamad International Airport.'  And yes, that fully is the big teddy bear in the background at 00:48.  Can you imagine what the symphony of... Newark airport.... would be???  I mean...

This is all to say that especially with the long running blockade in effect, Doha's tourism industry is playing to its strengths and using the constant influx of passengers to its advantage.  The +Qatar stopover program provides free one night's accommodations for passengers on layovers of more than 12 hours.  It lacks the food and transport, but is far less restrictive, and lets you pick your own hotel.  It also provides a free visa for travelers from countries not included in the new multi-entry program.

As a side note, the website appears to be asking you to build a multi-city itinerary, but each time I've done it a simple round trip that defaulted to the long layover time was fine.

This can be an amazing deal, especially since the hotels are quite nice.  They include some high end and recognizable brand properties that I'd happily stay in even without this deal.  A second night can also be added for just $100, meaning you are getting a great hotel for $50 a night. 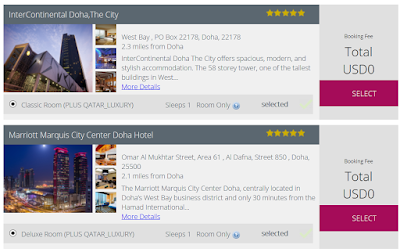 ﻿
This deal is technically time limited, and ends December 31, 2018.  However, when I used it last year, it was time limited then, but keeps getting extended.  If the blockade continues, I expect it will keep on rolling along.  I'm crossing my fingers that they push into next year as I have a nice long layover in Doha in January.

What has changed though, and what made being in Doha in that perfect storm of Ramadan, summer, and blockade, was that the list of hotels participating was more expansive and had some options that were simply insane to get for free.  Which... is how on my second stop in Doha I was up all night at the Ritz Carlton, by myself.... for abso-frikkin-lutely free.

And that, my friends, is a topic for the next entry...

Read Up Next- "I still can't believe this is real life" : A free night at the Ritz, and the most insane lounge to date.

~CruisingAltitude
Posted by CT at 5:32 PM