One Million Miles To Vegas 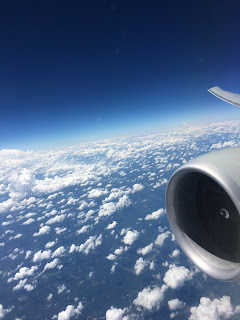 I don't think I quite had realized until recently, though I well should have, that this weekend's mileage run would conclude with my crossing my Million Mile threshold.  Today as I fly over the Nevada desert on the way back from London, someplace over Las Vegas, I will have completed a million- yes a million - miles on American airlines and its partners.

It's been over a decade of many, many, journeys in the making.  This million has touched on every continent Oneworld flies to, and over 20 countries and counting. As a practical matter, crossing your millionth mile in the AAdvantage program comes with some modest and lasting benefits along with the bragging rights.  For starters, they toss an extra 35,000 miles into your account.  It's not a million, but with miles ever harder to earn on low fares, I'll take it.  It also comes with Gold Elite status for life.  Sure, Gold benefits are minor, but it's the thought that counts I suppose.  "Elite for life" sounds nice, doesn't it?

Practicalities aside, milestones are times to look back and see what you've learned and also wonder where to go from here.  I am not being cliché when I say that these million miles have been life changing.  I appreciate both the expansive experience of the world, and its smallness and vulnerability.  Our entire planet, our entire home can be circumnavigated on a 777-300 in a long weekend, and that includes time to get out of the airport and have some Dim Sum.

I feel like it calls for some kind of celebration, I'm not entirely sure what's appropriate.  Once again, alone in a crowd and on the way from somewhere to somewhere else entirely.  Maybe this is exactly appropriate after all.

As I wing over Vegas, few 'thank yous' are probably in order.  As much as I've dedicated words and pages to complaining about the changing AAdvantage program, I'll be the first to also acknowledge that it's this program that has shown me the world, and let me share it with my family.   Speaking of family, I'm eternally grateful for Mrs. CruisingAltitude for indulging this bizarre compulsion with only the slightest amount of side-eye when I explain my plan to start a mileage run in Sri Lanka, as if that's a perfectly normal human thing to do. 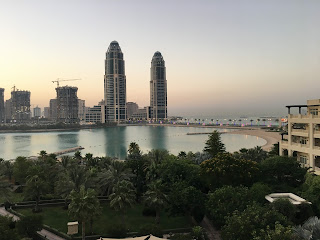 I also am eternally in debt to the crazy friends I've met along the way who are also plagued by this curious affliction.  These are the friends who when I ask who's up for flying to Sri Lanka just to fly home again, are always up for it.  Flying around the world for the hell of it is fun, but doing it with a bunch of other crazy flyers is amazing.  They're the ones I've flown with to Africa to pet lions, toasted life with at the world's tallest bar, and stood with watching the sun come up over the Persian Gulf from hotel balconies, all just for the sake of the journey.

As for where to go from here?  Anywhere, I suppose.  The next level is two million.  Maybe next decade..... but who really knows.

As always, fly safe, travel well, and live for the journey. 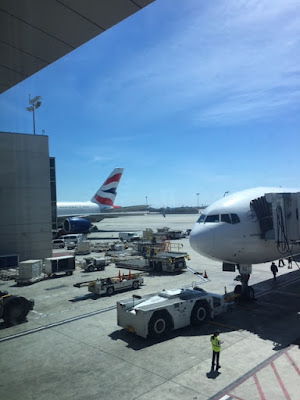 Part 1: So this is how it all begins

(Disclaimer- Writing this in a notes file and moving it over is apparently beyond Blogger's limited capability, so any strange formatting I apologize for in advance)
What do I think about British Airways Premium Economy (branded as World Traveller Plus)?
So far- 6/10
This rating is based on a comparison to other PE offerings... not anything better.

Let's begin at the beginning, why don't we?  I'm currently on the second half of the first itinerary of the Scandi Run season, which is the third flight and the second ticketing and also the second weekend of fun.  Decode that.  I dare you. 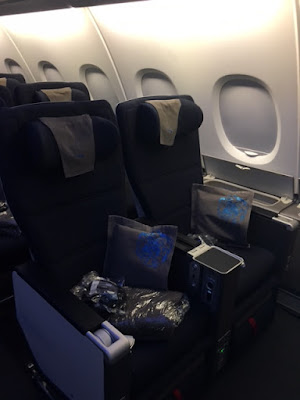 The real point is, this is my first flight on British Airways' a380 World Traveller Plus, and it's going fine.  I have a nice bulkhead seat in the front row of the cabin, which is on the upper deck behind Club World.  The only seat in the cabin I'm coveting is the one next to me- 61A, which is the same but is along the window so has control of two impressively large storage compartments by the window.  For what it's worth, my charming seatmate is sharing well, but that's to be expected as he boarded wearing a Hawaiian shirt (as he's British I can only assume it's authentic) and a fanny pack, so no huge shock.  (He will later turn out to be a lovely and well traveled ophthalmologist and we will forgive him the fanny pack).

Point of order- avoid the last row in the cabin as I can't imagine dealing with the bathroom door constantly opening and closing.

Further point of order from several hours into the flight- row 60 and row 61 bulkhead are the place to be.  The recline, while nice, is extensive and if you're not careful you'll have the person in front of you in your lap.

Premium economy, I will say is better than regular economy.  The seat is closer to domestic first/business plus a little more recline and a footrest, which I have currently augmented with my Briggs & Riley cabin bag to create a bit more support. 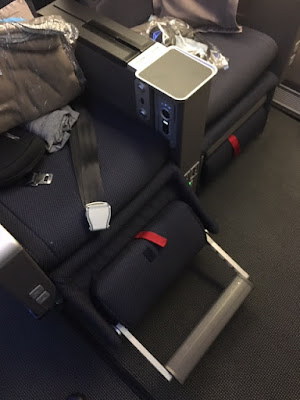 I boarded with group 1 due to status, so I had plenty of time to settle in.  Bin space, even later on, was fine.  The cabin is laid out in a 2-3-2 configuration, so unless you're planning on cuddling with your travel companion, the center seats are to be avoided.  The bulkhead seats do seem to have the best legroom, and if the fact that the, admittedly hilarious tipsy, women behind me rattling my seat whenever they get up is any indication, the best pitch.  The seat also comes with a small amenity kit and a likewise small pillow. 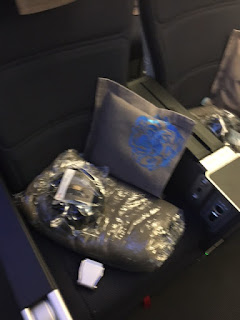 Now to the nitty gritty- we pushed back on time, and the plane handles the bumps well.  The service started with hot towels and menus, followed by a first pass with the drink cart and a bag of pretzels.

Point of order here that's bugging on me- here's how it went:

(Lovely and funny) FA: Something to drink?

Me: Gin and tonic please.

(FA hands over he G&T, followed immediately by a bottle or wine and a glass)

Please note the dinner service is a fair bit off.  So I'm left with a tray table packed with wine, water, tonic, two bottles of gin (don't judge), and pretzels to boot.  Not classy. On to dinner, and they serve front to back so I order the beef.  It's fine.  Along the lines of AA domestic 1st, witch doesn't say much, but I had the beef cheeks and pork chop at the Qantas lounge, so I'm all good.

There's really no follow up service.  After giving my seatmate with the now abandoned fanny pack my 411 on where to go in the world, I'm forced to wade back through main cabin proper to ask for another G&T before ny-ny. (It's at this time that my seatmate-now-buddy feels the need to tell me he's not a tea totaler despite the lack of wine with dinner, and I don't exactly know how to take that... so I decide to take it well.).
I also get to enjoy a lovely discussion about tax credits for electric cars, and the feasibility of said electric car exchangeable batteries and the physics thereof, including the guy across the aisle.  Please note this isn't a sarcastic comment, I quite enjoyed the diversion.

Before landing they served a breakfast.  It wasn't good, but I ate it. I needed to fortify myself before being dumped headlong into the LHR chaos at what was about 1am my time.

BA is a study in how the mighty have fallen.  In the past, it was a truly good airline with better products and service, but budget cuts have lowered their standard to the point that most competitors hard and soft product is much better.  AA, CX, QF, etc all have slightly-to-much better Premium Economy on similar routes, and BA's Club World (Business class) seat likewise pales in comparison.
In the end we pulled up to the gate 15 minutes early, and I was happy to be on my way.  All in all, it was fine, especially since I was flying on a cheap fare.  The bulkhead seat is decently comfortable, but I wouldn't want to be really anywhere else in the cabin.  In any case, I'm getting to Denmark safely and on time, so I could have much bigger things to worry about.
Travel well,
~CruisingAltitude
Posted by CT at 2:37 AM No comments: