Around the World in 80 Hours Part 7: At Least It's Not Jakarta

After several notoriously bad layovers, some of which even included having our passports taken from us with little explanation, and returned an hour later...still without our onwards boarding passes we'd been asking for, and yet others involving all-nighters at airport restaurants with questionable hygiene, the phrase 'at least it's not Jakarta' has come in quite handy when discussing various, less than ideal, airports and destinations.

But, I'm getting ahead of myself here.  We arrived in Columbo on our Malaysia Air flight around midnight local time and found ourselves in a packed terminal.  This was likely a result of the fact that the airport's runways are undergoing massive renovation, and so all flights have been moved to the overnight while the work takes place in the daytime.

To get our next boarding passes for our Qatar flight, we went to the Sri Lankan transfer desk so we didn't have to exit customs.  It might not seem like they can do this for you, but they can, it will just take some time.  It will also take some aggressive line-guarding, since the custom of waiting your turn is a little hazy in this part of the world.  May the odds be ever in your favor.

Though it's not Jakarta, Columbo is nevertheless one of those airports where a huge range of people come together, and the amenities and technology lag behind.  It has it's fair share of confused regional travelers, backpackers sleeping in the hallways, and the like.  What it does have going for it though is that it's a home airport of a Oneworld member, Sri Lankan, and as such offers a decent lounge option, if you know where to find it.

The caveat here is that they'll try to send you to the "Amalya" lounge, which is a fairly minimal, crowed space.  The Sri Lankan branded lounge is much , much better.  To find this lounge, from the transfer desk, bear left, and pass the various duty free and tea merchants, then look for wooden doors guarded by a couple of lions.  Easy.

We spent a couple hours re-couping and waiting out the layover before boarding our much anticipated business class flight on Qatar to Doha.  I did attempt a shower even, and learned I probably should just have waited to do so until we reached Doha.  The staff was very nice, but the shower room lacked amenities and I was just provided one thin towel, and no hair dryer.  Suffice to say, I emerged looking much like a drowned rat with jetlag.  Once again, no one said circling the world in 4 days was going to be all glamour and five star service. 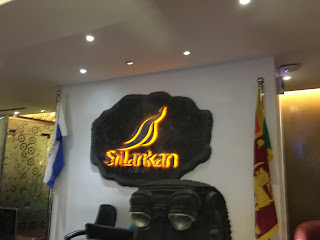 While I slowly dried out, I had a cup of Sri Lankan tea, which was fantastic.  Soon enough, we headed onto our next flight.  This was a milestone of sorts because it was the first segment actually of the ticket that started this whole thing.  Arguably, it's the cornerstone and main event of the weekend.  The first flight was from Colombo to Doha, a 'quick' four hours or so in flight.
We found our gate and were sent to a separate part of the gate for business class passengers.  CMB is one of the airports in the region that does security at the entrance to each individual gate, so be prepared for a few additional minutes between the lounge and the plane.
As we all know, however, premium class doesn't necessarily mean premium behavior. I spent the last 20 or so minutes before boarding sitting on a bench next to a guy face-timing his girlfriend who he had clearly woken up in the middle of the night in order to loudly talk to her about nothing of any real consequence, and repeatedly pronouncing Doha "Doo-HA!"  As travel companions go, I'd rather have been in the departures are of This Flight. Where's 80 falcons when you need them??
It should be no surprise then that finally boarding this flight was heavenly.  You can say what you will about Qatar as a place or middle eastern airlines generally, but when you're tired, it's 3:30 am local time, you had a shower with insufficient towel-age, and have spent what seems like an eternity hearing the airport's local frat boy yell about Doo-HA﻿, walking to your gigantic business class seat and being greeted with truly 5-star individual service that begins with a hot towel and fresh mint lemon juice ranks in the top 5 airline moments for me, at least.  It's an exciting enough thing to force the creation of possibly this blog's longest run-on sentence to date, even.
Even though it was a fairly full flight, the attendants managed a courteous and detailed service from the time we stepped onboard until we walked off the jetbridge in Doha.  They even offer dine on demand service in this four hour flight.  I had the curry and a glass of (real) Champagne, and it was the best thing I've had on a plane.  Shortly thereafter I kicked back for a nap and managed to shrug off the lingering jetlag haze that had been following me since Hong Kong.

In conclusion- all's well that ends with a seat up front.
Up next- Doha and the long road home.
~CruisingAltitude
Posted by CT at 4:42 PM No comments:

Around the World in 80 Hours Part 6: A day and a night in KL. Or...All I want for breakfast is everything.

For the prior chapters of this adventure:
Mileage Run Preview: Best Worst Decisions
Around the World in 80 Hours Part 1: In The Clear!
Around the World in 80 Hours Parts 2 and 3: Over the Ocean, and Past the Arctic....
Around the World in 80 Hours Part 4: Hello Hong Kong, My Old Friend
Around the World in 80 Hours Part 5: Lounging Like There's No Tomorrow (Because Tomorrow Was Yesterday)
What HKG is to lounges, Kuala Lumpur is to good hotel deals.  KL is easily one of my favorite long layover cities.  It’s modern, shining, and yet very affordable.  We stayed at the Le Meridien in KL sentral, and it didn’t disappoint.  Our group of travelers included 3 Marriott/SPG platinum, and so we were able to assign the rooms easily enough for us all to have access to the excellent club lounge.
We arrived off of our CX flight into KUL after midnight local time, and so we missed the last train into the city.  This didn't seem to be that big of an issue at the time, since Uber rides are notoriously cheap in KUL, there were 3 of us to split it, and it was only supposed to take about 45 minutes, which is only 15 minutes longer than the normal train ride.
In case you couldn't tell from that set-up, there's a 'but' on the way here.  First off, our Uber pulled up and it was a sub-sub-compact car.  Even though we travel light, it was a tight squeeze to get all of us in along with our luggage, much of which ended up on our laps.  But it got worse from there.  As we drove along, it really seemed to be taking more time than it should to get to KL Sentral, which is on the closer side of the city to the airport.
Our fears were confirmed when I looked out the window and saw the JW Marriott go by....which is not in Sentral, and we decided against specifically because it was less accessible from the airport!  By now, mind you, it's about 2am, and we're in traffic in downtown Kuala Lumpur in a clown car, being smothered by luggage.  What I wouldn't give to be back at The Pier right about then....

We finally got to the hotel by loading maps on our own phones and giving the confused driver turn by turn directions in broken English and and a fair amount of improvised sign language.  Mind you, he did have his own Uber app...but whatever...this is mileage running.  Local time is now closer to 3am.
Thankfully, the LM hotel at Sentral is beautiful, modern, and offers good service even in the early hours of the morning.  We got checked in, and after a quick shuffle to make sure we got our Platinum SPG members in the group signed on to the rooms for lounge access purposes, we were good to try and get some sleep.  By this time, it's closer to 4am, but finally we're comfortable.
Mind you, with the jetlag its' really about 11am for us, so even getting some sleep took a bit of adjustment.  I think I got about 4-5 hours' rest, before getting up to start again.  I had a lunch meeting at the Hilton next door, so I had to try and be somewhat human for the occasion.  Side note- I eventually got back from the meeting to find my travel compatriots still in the same place I left them in the lounge still chatting about planes & trying to figure out just what the heck was going on in the non-subtitled tv show playing on the nearest flat screen.  No one saw an issue with this.  Mileage run.
First stop, of course, when you need to recover from the ravages of mileage running is....back to a lounge!  In this case, the excellent club lounge on the top floor of the hotel.  As SPG platinum we had complimentary access, complete with a generous buffet that included made to order omelets, noodles, congee, and miso, as well as a full English breakfast, fruit, and any number of other dishes.  In the evening, they host a several hour happy hour with food and drinks.

We ate.  We ate a lot. (for free)  I won't lie, I felt the judgment of the chef preparing the made-to-order menu by the time I made my 3rd trip up to see him, but mileage running has made me largely immune to the scrutiny.  I figure if I'm flying around the world in a weekend, then how many kinds of soup I want to try for breakfast is really the shallow end of the potential life choices judgment pool here.
Given that we had a less than 20 hour layover, and were headed back to the airport that afternoon, we pretty much spent the time sleeping, hanging out in the lounge, and with a few cans of Carlsberg by the pool.  Absolutely no regrets were had.  Pro tip- anywhere in SE Asia just about, you can make a beer run for a fraction of the cost of hotel prices, even cheap SE Asian hotel prices.  Pro pro tip- there's a 7-11 in the KL Sentral train station across the street from the LM hotel.

Having more than learned our lesson on the way out, we took the train back to the airport.  It was indeed an easy 30 minute ride right to the terminal.  In short order, we got checked in for our onward flight to CMB on Malaysia Airlines, and headed out to the Golden Lounge for the next round of food & drink.  Remember what I said about my lack of shame when it comes to free mileage run food?  Well, it still applies.
After this last stop in KUL, it was time to head out for our next flight.  After several phone calls, a call back from an agent in Malaysia at 4am Los Angeles time, and paying an additional $8, I'd secured an exit row for the next three hours, which was some welcome leg room.  On the more exciting side, this was our last economy flight, and took us to the first Qatar Business class flight of the trip!  But first, we had to negotiate our 12-3am Columbo layover.... which is coming up next.
~CruisingAltitude
﻿
﻿
Posted by CT at 2:59 PM No comments: