Scandi Running Part 1- So This Is How It All Begins

Get the background: The Scandi Run- Preview

I'm a big proponent of 'firsts.'  I love first tries, first place, first class.  That makes this weekend fit right in.  It's the first of at least three mileage runs that follow more or less the same pattern.  It's good then, that right after firsts with me, comes familiarity.  I'm aiming to have this thing down to a science by October. A kind of science that, sure, will be thrown way out of whack by weather, crew delays, and loose bolts, but there's a science to all that as well when you think about it.

It's a first for the Scandi run, and also a first inasmuch as it's going to be cold.  The potential level of cold really didn't hit home until today when I saw a picture of the ice burgs currently floating past Nyhavn canal.  Until this point, I'd been way to confident in my ability to suck it up for a couple days.  I've lived in Boston before, I survived, it's in the 30's, come on...

After that, I threw in an extra (couple of) coats, stopped at REI to buy better, more waterproof, and less 'I don't remember what snow looks like' gloves (REI in Los Angeles is the most pathetic place to buy winter gloves, FIY.), and pretty well gave up on my romantic and responsible goal of running a 5k through Norreboro the morning after I arrived.

Granted, the 30 degree weather may be considered by the Danes to be a 'heat wave' this time of year, but I'm a cold pansy at this point, and I'm pretty much going to have to come to terms with it.

I'm currently sitting at the bar (as one does) at the Qantas First Lounge in LAX awaiting my flight to London.  It's delightful as per always, and not yet overcrowded as I'm several hours before the late night flights to Sydney, Melbourne, and such.  So far, all's well.  As I've realized it's a published EXP benefit, I tried out the LAX Flagship Check in for the first time, and it was all kinds of line cutting fun.

﻿ Compared to CLEAR, it's basically a nicer version with a dedicated ticketing counter, and a concierge who rolls your luggage for you to the front of the pre-check screening.  It definitely saved me a few minutes, but it was more about the experience. With elite benefits being axed left and right, it's still a nice gesture. 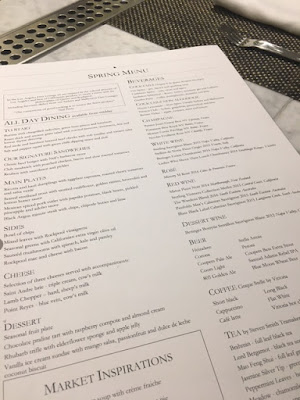 With my several hours before boarding, I have to actively hold back and pace myself as I work through the menu.  I'd prefer not to admit that I also had a stop at the Flagship Lounge in T4 on the way here for a bowl of pho, but I will admit it, because mileage run, and that stuff was tasty.  Pro-tip- if you like it spicy, there's siracha on the bar by the bloody mary fixings. 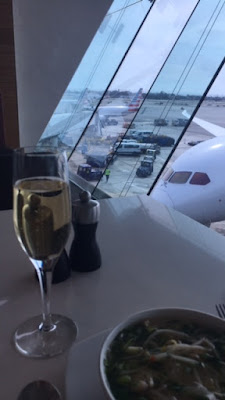 T-2 hours, and my incoming flight is about to land, the weather in the vicinity of London and Copenhagen airport looks passable, and so far I've only forgotten my power cube (remote power bank), so things are looking good to go.  Plus, I've got a lovely bartender serving me something called the 'Garden Party' which has mint leaves in it.  Granted, I've already expended my first flyer acquaintance, possibly by unnervingly confusing him by trying to explain what, exactly, I was actually seeking to accomplish by flying to Denmark 3 times for now reason, but that's not really a huge concern.  And really, he's here to 'talk about bonds,' so what does he know.  Besides, it happens more often, or possibly exactly as often, as you might think.

~CruisingAltitude
Posted by CT at 4:39 PM No comments: