** Note: this fare deal is good as of the time this was published.  These generally only stay active for a limited time, especially for certain dates.  If you're interested in this deal, I encourage you to hold your tickets as soon as you can!**

I don't usually post specific flight deals on this site, unless I'm in the process of planning for or taking the trip.  However, I've gotten multiple requests to share some examples of trips I'd recommend.  Usually I feel like my itineraries aren't for the casual traveler, as they're aimed at maximizing my miles and perks.  However, sometimes a deal pops up that serves both purposes of earning some serious qualifying miles, and having a great and comfortable trip too.

This week's Los Angeles - Liberia, Costa Rica deal is one of those rare ones.  For around $670 round trip, including all taxes, you can fly to Costa Rica.... In business class!  Aside from having a good destination to spend a weekend, this trip will be comfortable start to finish, and earn 13,770 elite qualifying miles.  That's a good chunk of the miles needed to reach AA's Gold and Platinum levels, and doesn't hurt in your quest for the higher status levels either.

How to book it:

Both the AA.com site, and Google Flights are showing plenty of availability currently. To search for this fare, put in LAX as the starting point, and LIR as the destination.

For bonus points, once a day American flies their biggest, nicest, plane between LAX and MIA.  For the same price, you can choose these flights and have a very comfortable lie-flat bed for most of this trip.  Just look for the flights (see photo above) that show "777" or "77W" as the plane type.

This trip is similar to last year's Panama City and Quito deals, but comes even cheaper, with only a couple fewer miles.  All in all, this one's a great option.

If you want to know more about miles and points, or get help with booking tips like these (or any other travel) I'm happy to help.  Check out altitudeconsulting.net for more info!
Posted by CT at 2:54 PM No comments:


2016's mileage runs ended with a satisfying requalifying run to Quito wherein all the highs and lows of mileage running were had.  There were some beautiful flights, very nice planes, even nicer lounges, and also a fair share of delays and missed connections.  It was also bittersweet, as it was the last year of 'good old fashioned' mileage running, before the new requirements kicked in.

In case you missed it, starting in 2017 AA has made some fairly drastic changes to their elite program, including adding a qualification level, making the elite tiers 25k, 50k, 75k, and 100k, respectively, as well as adding "Elite Qualifying Dollars" to the mix.  Under the basic letter of the law, this means to qualify for elite status, you ALSO have to spend 3, 6, 9, or 12 thousand dollars to reach your target level.

This, as I've written about [HERE] is only the basic letter of the law applied to flights on American itself, which makes flying partner airlines a good workaround to those new spend thresholds if you know where to look.  My plan for trying out this new system is to scour the Oneworld airlines for highly discounted fares in premium economy and business class.  Because many of these fares do not originate in the US at all, this requires a healthy (err...I use that term flexibly) sense of adventure.

Speaking of adventure, let me tell you about what I've got on tap for February this year:

It all started with a seemingly innocent tip-off from another mileage running friend about a pretty lucrative premium fare on Qatar Airways.  The basic itinerary was from Columbo, Sri Lanka (CMB) to Doha, Qatar (DOH) to Boston (BOS) and back.  A good long haul, available on weekend dates, mostly on Qatar's brand-spanking-new a350, and in business class on top of it all.  Can't go wrong with that!

Yup, I live in neither Boston, nor Sri Lanka.  However, the flight was available at the discounted price on a very limited basis, and for just a couple of days.  So I went for it and figured those pesky details (like where the flights actually come from, and where they go to) would most likely work themselves out.  You know, like geography has a tendency to do, right?

﻿
Once I booked the tickets, I set about the task of getting myself to Colombo, and home from Boston.  What's worth noting here, is that in February I'm only doing half of the CMB-BOS-CMB Qatar itinerary.  Since it would be entirely too much flying for my 'real life' schedule to do LAX to Colombo, to Boston, back to Colombo, and then all the way back to LAX in one go, I booked the outbound and the return on two separate weekends several months apart.

So now I needed to "position" to CMB to get this thing started, and then just get home from Boston at the end.  Boston was simple enough, but CMB proved to be a little stickier.  The issue is that to get to CMB from LAX on one itinerary turned out to be too expensive for a mileage run.  However, because of Malaysia Air's Oneworld hub in Kuala Lumpur, there were some cheap fares to Malaysia, from which it was a short and cheap award ticket using some of my Amex Membership Rewards points to CMB.  Done and done.

What's even better, is that the flights allowed us to plan a full day (er..12 hours) in Hong Kong, and a full day and night in Kuala Lumpur. 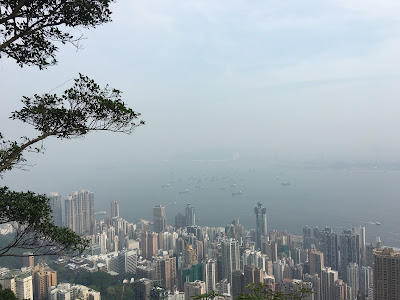 For the record, these are two of my absolute favorite mileage run destinations.  They have it all- good quality airlines, fantastic airport lounges, workable public transport, plenty of hotel options, reasonable public safety, and in the case of Malaysia a truly awesome currency exchange rate to the dollar!  It's stopovers like this that make an insane itinerary like trying to fly around the world in 4 days seem maybe a tiny bit more like a vacation.  Or, is that just me?  (Yeah, it's probably just me)

What results from this kind of split ultra long haul booking is that you are able to fly COMPLETELY around the world with one continuous set of flights.  The trips is booked on four separate itineraries, so I'm keeping everything crossed that things go smoothly, at least as far as CMB.  After that, Qatar will have to get me to Boston somehow, and once I'm back in the US, AA will one way or another get me home.

To protect against misconnects, most of the itinerary has very long stopovers so hopefully even a several hour delay shouldn't make the whole thing implode.  As much as I love travel, the idea of being stranded in Sri Lanka at 3am doesn't sound all that great.

In any case, this is what my 'around the world' mileage run looks like:

And finally, flight 6- BOS-LAX on American

Plus, it only takes 4 days.  This is also the moment when I realize I just booked a 4 day trip, and only one hotel night.  Oh well, I never was good at math.  As crazy as it sounds, I'm actually really looking forward to this trip.  It's an even bigger challenge than I've done in the past, and at least half of the flights are guaranteed to be in business class.  Plus it puts me well on the way to requalifying for my EXP/Oneworld Emerald status for the next year.

Then in June...I do it all again, just backwards and in heels (so to speak.)  However, that's an (even more convoluted) story for another time.