Report from the return ....

This week I was sent off to Philadelphia for work.  Well, about an hour south of Philly to be precise.  The trip included two stays a different Sheratons I hadn't been to before, a rental from National's executive selection at PHL, and flights from LAX - MIA - PHL and then PHL - DFW -LAX.

I'm currently on the last leg of the flight and I concur with the pilot's recent PA announcement- it is 'a beautiful night to fly.' We've got calm skies and a beautiful red and orange sunset to fly off toward.   The flight was delayed a few minutes due to some weather from the Midwest that kept the equipment (an endangered 757) from getting to DFW on time.  I've decided not to let it bother me, all in all the trip has been successful thus far and I don't have a connecting flight to worry about.

HOWEVER, they took orders for dinner correctly- this is an odd numbered flight, and they started at the back, but they're serving from the front.  I'm in 6F and hungry for my chicken and....whatever else it was she said.  Yes, this would be the best example ever of 'First World Problems.'

Back to the topic at hand.  As far as frequent traveler perks go, I'm feeling fairly solid on this trip- 4 for 4 on the upgraded flights, 1.5 for 2 on the hotel rooms, and a definite (at least two category) upgrade on the car.  Oh, and the actual reason for the travel went well also...

It started off with a surprise gate upgrade for the overnight LAX-MIA, which was more than welcome.  4 of us on the standby upgrade list cleared on a sold out cabin.  Thank...somebody....for minor miracles.  The flight was even at the gate twenty minutes early, giving me time for a shower and a few of those little muffins in the MIA Admiral's club.  That is, of course, once I found it.  I spent a good five minutes walking in small, pathetic circles in Terminal D, dragging my carry-on behind me before realizing the sign was right there all along.

The shower rooms were nice, though I had to wait a few minutes for one to free up.  Like in LAX they have great amenities.

The MIA-PHL leg was upgraded as well.  I also believe it was delayed an hour, mostly after boarding due to 'paperwork issues.'  However, it still being nighttime in Los Angeles, I don't remember much of it.....just the pilot apologizing as we finally left the gate, and sometime after takeoff the flight attendant nudging me to ask if I wanted eggs or cereal.  Not a bad way to ride out sequester-induced slow downs.

It was my first time in Philly in recent memory, and I wish I'd had more free time to see something other than my hotel rooms.  I mean, running to and from the car I did notice some lovely cobblestone streets and cherry blossoms....  But this is a frequent flyer blog....so the hotel rooms are a major feature, aren't they?

Before I get to that though, this was my first rental from National at PHL.  I'll start off by saying the prices were outrageous.  This seems to have been a City-wide supply and demand issue.  When I boarded the shuttle (Monday morning) the driver was telling inquiring customers that they were reservation only, as were Hertz and Alamo.

Now, here's the thing about National- its my new love car-rental wise with the executive membership though AmEx.  I love picking out my own car, and the row tends to have some fun finds.....but when you get off that packed bus and head toward the ES row it's suddenly like Lord Of The Flies, but everyone is tastefully business casual and towing a rollaboard.  For my part, I go in with a plan- I know the high end options- Genesis, 300c, Buick, Camaro, Maxima, Avalon, higher end SUVs and certain trim options....but...

....I'm also not proud. This time I threw my bag in a Lacrosse (with 16k on the ODO) took the keys, and went to check the mileage on the Enclave parked behind it.  The Enclave won- less than 300 miles, working XM, and all the options.  I did feel silly with just my one suitcase and myself in it, but the seats were heated and PHL was a whole lot colder than LA.

Annnnyway..... the first night in town I stayed at the Sheraton Society Hill.  The hotel was fully committed, according to the front desk and so the only upgrade they could offer was to a room on the club floor (3rd out of 4).  Being a slightly obsessive flyertalker I gave a quick look to the website on check-in, and there were no suites still for sale.  I don't have any pictures because it looked like every single other standard Sheraton room.  Soothing earth tones and 'Shine' amenities.


The hotel itself is on the small side, but well kept up.  Staff were pleasant, but I didn't get the 'going above and beyond' feeling from them.  My one real complaint was that my room was so far from the only elevator it took forever to get downstairs.

The second night, as I couldn't get a room in Philly to save my life (some major convention no one seemed to know the name of was in town) I got a room at a great rate on our company's SET at the Sheraton Wilmington South.  Now, while this location lacks the charm of Society Hill, it was the clear winner for me in amenities and service.

For the business traveler passing through, it's easy to find. It's right off the highway, but asking for a room on the far side will take away any noise issues.  Overall, the entire staff, from the check in desk to the bartender had a serious case of 'trying too hard.' This is literally the best compliment I can give.  Even though they too were fully sold out for the night, I was already double upgraded to a deluxe suite- three rooms, kitchenette, jacuzzi tub, on the top floor. The property was clean and modern, club lounge was well stocked for both evening and breakfast, if lacking in square footage.


The trying too hard followed all the way to check out the next morning when I was asked about 4 times how my stay was, and nearly chased down the hall by the manger to ask if I might have time to write a TripAdvisor report.  Now, one could say this is all excessive, but I have to admire a staff who realizes that traditional advertising now pales in comparison to first hand reviews and social media status.  (they'll be getting that review)

As for the return trip, I have some unsolicited opinions about the PHL airport, both good and bad.  However, the sunset has faded out in front of us and it's about time for dinner. I don't want to risk getting whatever it is tonight all over my keyboard, so my feelings about Philly's security lines (NO pre-check!!) will have to wait.

Until the next segment....

~CruisingAAltitude
Posted by CT at 7:25 AM No comments:


Made it back, only a little delAAyed into LAX last night.  Mission(s) accomplished, miles earned.  Trip report to follow soon.
Posted by CT at 12:36 PM No comments:

It's been awhile since the last update.  There's been a little travel and plenty going on in the 'grounded' side of life....but that's not why we're all here, is it? ..... 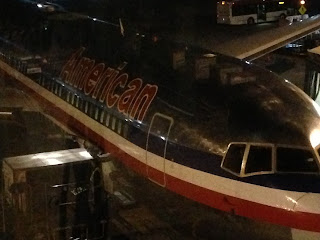 Well, who doesn't like to spend a Sunday night on a plane?  I mean, what kind of question is that?  Not me, clearly.  Tonight I'm at LAX, using up prime Admiral's Club real estate, facing an impressive row of late night arrivals and departures, still painted the classic livery colors (see previous post for my feelings on that) dwarfed by the jets lined up in the background at TBIT.  The place is fairly full, mostly with people headed off on Qantas to Sydney and Melbourne, and to lose a day in the process.

For my part, after a weekend of dodging the crowds in my neighborhood for the Grand Prix races, I'm headed out to Philly for work for a few days.  Simple enough, but I set myself up for the extra couple thousand miles and am headed overnight to Miami first.  Because, well, like you do....

The upgrade's looking good for the second flight, but probably not the first.  This is to be expected as I booked later than usual, but it does break my perfect upgrade score since getting back to Ex Plat status.  Somehow I'll survive.  I've got my overnight kit and hopefully time for a shower in the Club between flights, then some downtime before the appointments start Monday afternoon.

So the flight plan checks out, the hotel situation however....is more complex.  Now, if someone wants to tell me what the h%$^ is going on in Philly the next few days, I'd be very appreciative.  Even over a week ago there was no Starwood (or Hilton, for that matter) that could book a two night stay.  Being Platinum with SPG now I called and was informed that they could force a reservation at the rack rate for me.  Thanks but no thanks guys, I'm sure your Downtown Sheraton is fantastic *ahem* but if I'm paying $400 a night for it I'm going to have a hard time getting it past accounting when I get back.

As it worked out I managed to find one night in town at the Sheraton Society Hill, and then will have to pack up and stay in yet another Sheraton in Wilmington the next night.  Downside- all that moving.  Upside- two qualifying check-ins.  (come on, there had to be an upside)

All in all this trip isn't a duplicate of any I've done before, so I'm looking forward to it.  Hotel reviews and such to follow I'm sure.

Well, I'd love to stay and prepare a full traveler rant about my decision to let my Admiral's Club membership lapse in favor of getting in on my AmEx but.....oh so sadly....that will have to wait.  It's getting to be time to think about changing into the 'redeye clothes' and heading off to the other coast (hopefully without any delAAys). Until later, fly safe.

~CruisingAAltitude
Posted by CT at 10:12 PM No comments: