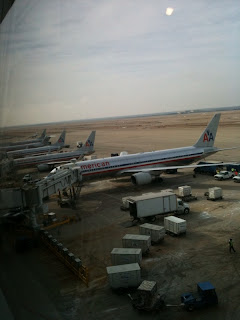 Okay I know the last deal I talked about was also about the Amex/Avios conversion but I can't help myself, this one's too good.  I have a renewed love for this deal.

In my previous post I talked up the basics of how to get an American Airlines domestic flight out of American Express Membership Rewards points.  It all still applies, but there's a few things to note- First, British Airways has updated their site to make this easier!  Now, when you go to search for a flight to book using Avios (their mileage currency, see previous post), it automatically shows the partner airlines!  Good for them...and me.  Secondly, right now there's a 100k Membership Reward point sign-up bonus offer for new Platinum customers, which is definitely worth looking into if you don't already have the card.  As discussed, those points can be put to good use.

I was looking into getting a friend a one-way ticket from DFW to LAX for this weekend (as in, in about 4 days).  Needed to do it on the cheap, hopped over to the AA site to see if by chance they had any last minute deals since this is the low season and I know for a fact they're not selling out those flights.  However, not a chance.  AA had the one-ways hiked up to a starting rate in the mid-$300s, with the decent time ones up to $470 (economy, one way!!).

I've done DFW-LAX a lot.  A reasonable fare for this time of year is $135 one way, actual deals are more like $115, and you don't hit mileage run territory until you break under $100.  I know this wasn't a mileage run, but I have my standards....

Seeing these prices, I didn't have high hopes for low mileage redemption either but gave it a look.

Wait.... what?  Yep, they were still selling those $470 tickets for MilessAAver rates.  Sneaky people that they are, going after last minute business travelers.

This, however, is fantastic news for getting a cheap redemption using Avios.  Even better- jumped to the AmEx site to transfer some points to find that they're doing a 30% bonus on Avios transfers through 1/13/13!  Sold.

So, here's how the final numbers all worked out-

-This same ticket would have required 12,500 hard-earned AA miles to book through their regular site, which would have "cost" about $250 in mileage value at the going rate of $.02 per mile.

-With the conversion rate, and using the average redemption value of $.008 per MR point (conservative average value), this ticket "cost" $64 in MR point value, and only $2.50 in actual cash.

-Given that this means I redeemed MR points at $.059 each for this ticket, it's definitely one of the best deals I've heard of lately.  That sign-up bonus they're offering right now could get you a whole lot of flying.

As said above, this has given me a new appreciation for the Amex/Avios/AA ticket system, especially for last minute off season tickets and would probably also be lucrative if you can plan well ahead for the more popular travel seasons while Milessaaver rates are still available. Rumor also has it that due to a glitch in the system, these tickets sometimes come up with complimentary Priority AAccess privileges- short security lines, pre-boarding, etc, but we'll see.  If that's true, this is a clear case of lower cost + better product.

-CruisingAAltitude
Posted by CT at 9:20 AM No comments: