As I wrote about before, I booked several 'same day turns' to Chicago.  I've got 2 down, with 1 left to go, plus an actual two night stay on a fourth.  So far, so good.  I cleared upgrades on three out of four segments, only had one long tarmac delay, and met several people all crazy (or smart) enough to be doing the same thing.   In any case, 7,000 miles down, 7,000 to go.  Yes, it's a lot of domestic flying in one day (about 8 hours, all in), but it also gives me time to relax a little, do some writing, and make some friends.  It also gives me a chance to write some answers to questions I get a lot about travel.

It's no secret that I spend a decent amount of time on planes and in airports.  It's also no secret that most travelers have a few tried and true luggage pieces they won't head to check in without.  I've been asked quite a few times for recommendations, so here we go...

Luggage is one of those categories where you can spend as much or as little as you want, and you (mostly) get what you paid for.  For me, the most essential item is the go-everywhere rollaboard carry on.  It goes without saying that when you're boarding a decent amount of flights in a year, especially with short turn around times or complex connections, you try really REALLY hard not to check luggage.  Baggage fees aside, there's just too much risk and hastle to be avoided.

Thus, the importance of a good sturdy carry-on.  Though I often covet fellow traveler's Tumi or Victorinox rollers, I sadly can't justify upwards of $400 for one bag.  I've been through the mid tier- Samsonite, Delsey, and Travelpro.  My personal favorite of these are the 'Crew' series from Travelpro.  I've had my current 'crew 9' 22" for over 3 years of hard use, and it's holding up admirably.  It's been with me the equivalent of roughly 12 times around the world, and the only noticeable wear is that the metal emblem popped off the front.  I haven't bothered to fix it, because it's purely cosmetic.  Wheels, handle, and zippers are all still well intact and going strong. 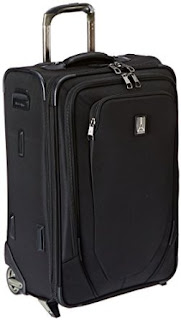 The current model of this bag is the "Crew 10 22in Rollaboard Suiter" I like it over similar bags because it's a decent price point for the quality, and is the largest size that fits into domestic sizers.  I found my Delsey or Ricardo would let me unwittingly overpack, resulting in some obnoxious moments at the gate courtesy of the occasional 'bag dragon' that we all learn to know and fear.

No, it's not a 'spinner' - the 4 wheeled bags, but omitting the exterior wheels gives you an extra inch or two of packing space, which is important to me when I'm trying to pack for an around the world trip without checking anything!  It also goes well from vacation to business travel, as it has a removable suit folder in the top. 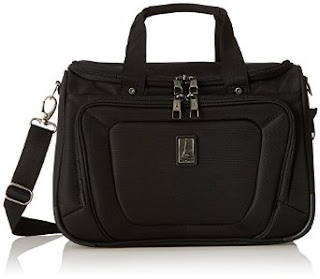 I've also acquired a matching Crew 10 tote bag, that attaches nicely on the handle of the rollaboard.  It fits quite a bit of gear, and in a pinch makes a great footrest or computer stand if you're in a bulkhead row with some footroom.  Completing the set, for my longer business trips, which can be several weeks, I added the "Maxlite Folding Garment Bag."  It's basic, but holds a surprising amount of clothes and other items.  My tip is to pack your clothes in it using wire hangars, and double and triple up garments on them.  The only thing that fills up fast is the space in the clip that holds the hangers in place at the top. 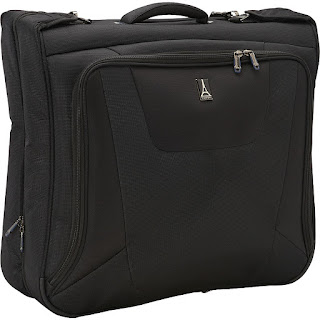 What's more, these three pices actually can all be stacked together and rolled with one hand.  The tote slips over the handle, and the garment bag connects just right to the front of the rollaboard using the luggage hook Travelpro includes.  Yet another bit of proof of the durability of the wheels and handle on the Crew 10 bag.

So, so...that ALL said, I have to introduce you all to my newest luggage addition....for which I went off-brand (up-brand??) to the Briggs & Riley Transcend Rolling Cabin Bag. 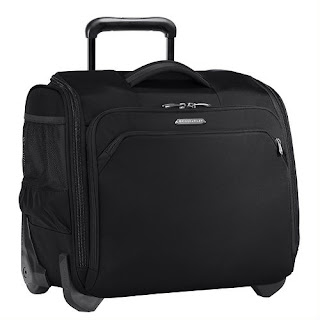 I realized after awhile that what I was missing in my setup was a smaller tote that could either be a rolling bag on its own, or stacked on my regular carryon.  There are times I travel where I'm either now checking (the horror) my regular luggage since we now travel with Babyflyer and it can't be helped, or when I'm not going on a trip at all, but need a nice looking rolling bag for work.  It's also been the perfect size to pack for the same day turns to Chicago, where I just need my laptop, chargers, and a change of clothes in case of long delays or forced overnights (which almost did happen on my first run this year).

So far, I'm very happy with it.  It rolls well, looks great, and has a 'universal' attachment on the back that lets it fit securely to the handle of just about any rollaboard brand.  The overall profile is a little wider than the regular Travelpro tote above, but with the wheels it can't be helped.  I haven't had it long enough to test the durability, but Briggs and Riley have a good reputation for making tough luggage pieces.

In other news, I've been working on some exciting, and hopefully useful and informative, travel-related projects and content that I hope to formally announce soon!  Thanks for reading & travel (and pack) well!

*This post does include affiliate links, but is not sponsored, and I do personally own and use the products mentioned.