Once again, I'm at the end of the year on a much appreciated trip to relax with family by the beach.  This year, it's a week in Puerto Vallarta on the Riviera Nyarit.  The weather is beautiful, the view is stunning, and it seems like a perfect chance to give a rundown of this year's mileage adventures.  As detailed earlier [Here], this season's trips were made up of two weekends in Asia for a total of just over 40,000 qualifying miles.  As it turned out due to some late breaking work travel, I happily ended up somewhat over my 100k goal, but I'm not complaining.  Maybe it just means I'll get my 'welcome to EXP' package from AA earlier than May, like I did last year.

All in all, the trips were a great success and great little 'milecations'... as much as flying 17 hours for a one night stop can be.  The first trip was the most complex, with 3 Asian destinations with long(ish) stops.  Thankfully, the upgrades cleared on both the TPac segments on AA's 777-300ER, making the flights very enjoyable.  I managed to catch some good rest, and watched The Birdcage for probably the 126th time in my life.  For some reason, long flights make me want to re-watch my favorites.

After landing in HKG, I took the Airport Express train, which goes pretty much nonstop from the airport to Kowloon and then onto Central, so it's hard to get lost.  And by 'pretty much nonstop' I mean it just stops at Tsing Yi.  So, just, don't get off at Tsing Yi and you're good!  It's about a $20-something round trip if you buy both ways when you get there, which beats a taxi for sure.

Side note here- I'm honestly sad I didn't start flying to Hong Kong ten years ago to get to experience the "Kai Tak Heart Attack" approach at the old airport in Kowloon.  The old flight path required entering a 47-degree turn at under 1000 ft AGL (usually closer to 600ft), and exiting the turn at 150ft!!  It was called the "turn at the checkerboard," due to an orange and white checkerboard painted on a mountain that served as a visual waypoint. 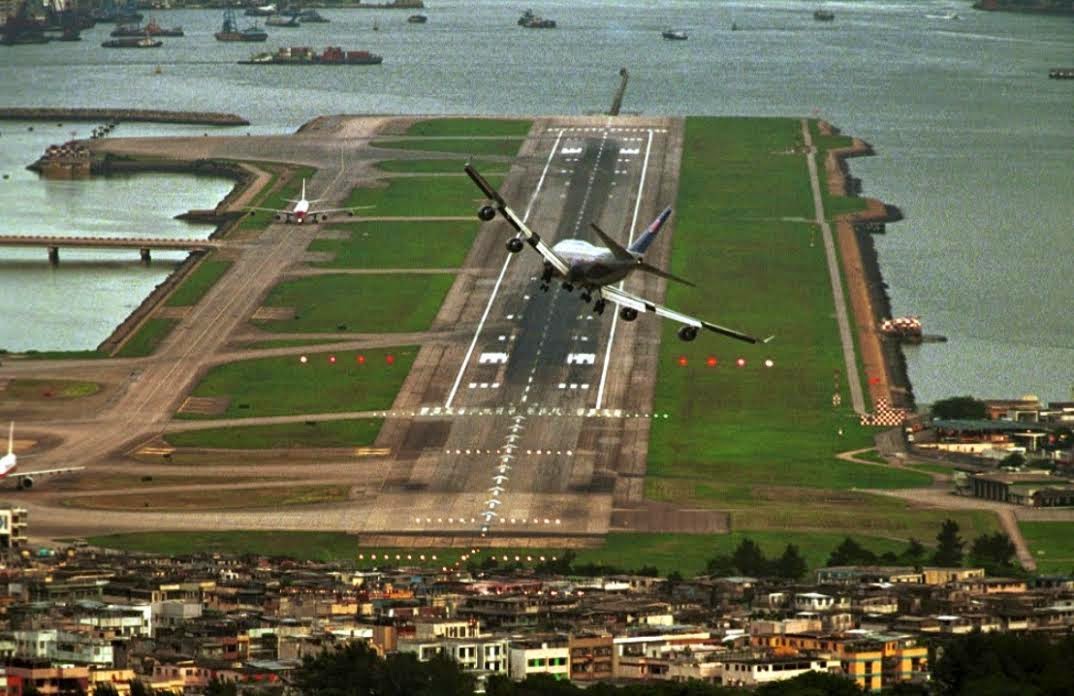 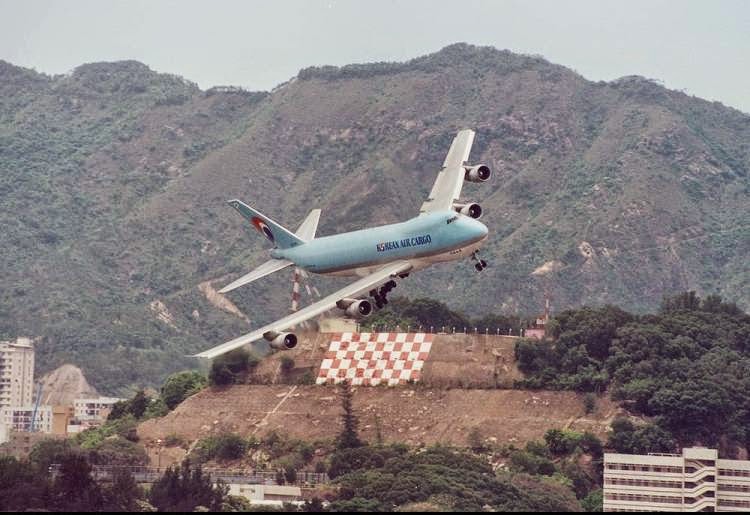 The rest of the short final approach took the plane so close to the buildings of Kowloon that passengers would report being able to see people inside their apartments watching TV!!  Yes, yes, this probably sounds like the 6th circle of hell to any nervous fliers, but it really was a feat of good piloting, and a part of aviation history. 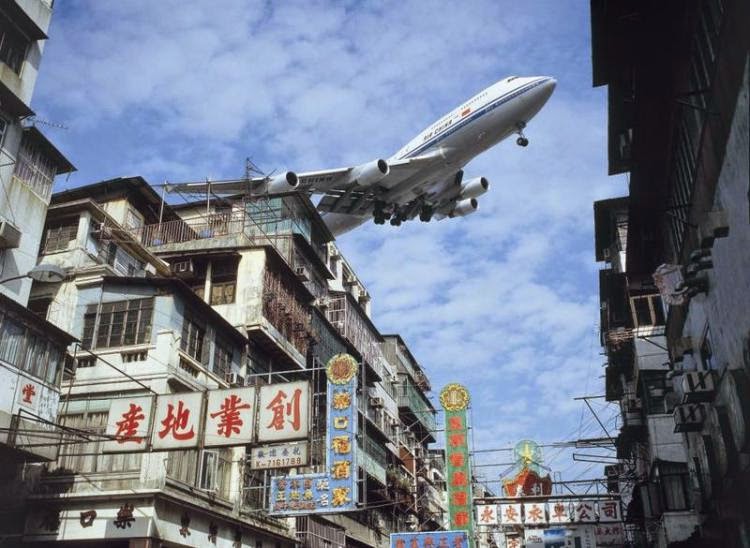 For the true AvGeeks, here's the chart for the Kai Tak approach, showing the location of the checkerboard- 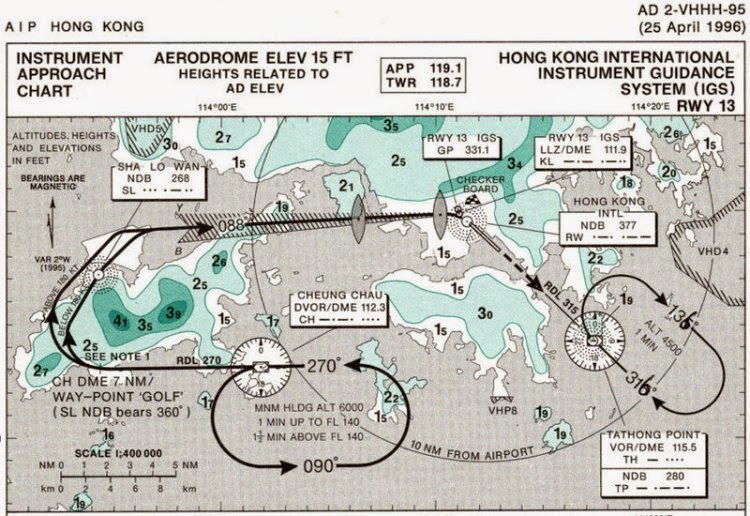 Sadly though, the checkerboard is no longer maintained, and is getting progressively deteriorated and overgrown.  However, 'checkerboard hill' can still be visited by way of Kowloon Tsai Park.  I didn't have time to go check it out on these runs, but maybe another time.  As long as AA keeps flying the DFW-HKG route with such good prices, I'll probably get another chance. 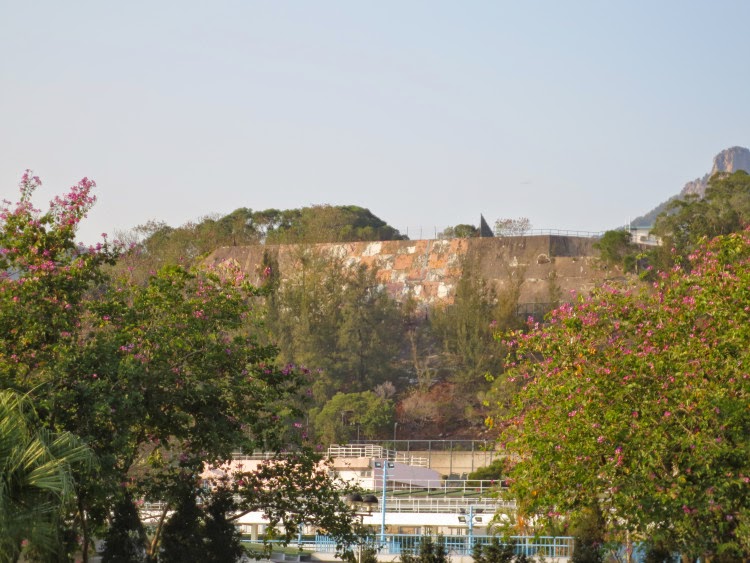 Okay, okay, well I know none of that was really applicable to this trip report as I flew into the new(ish) Chek Lap Kok airport....but sometimes I get distracted by aviation history and big planes landing near tall buildings.  It happens, and we're just going to have to deal with that from time to time.

Since this run only gave us a short overnight in HKG, we went right to the JW Marriott in Central.  It's a short one stop after the Airport Express, and is built over the Admiralty train station, so it's very easy to find your way.  My traveling buddy for this run  was top-tier with Marriott, so we ended up in a nice room on a top floor with access to their impressive executive lounge.  The views were great, though the Marriott is towered over by the Conrad next door.

One thing to know about this, and other area hotels, is that their hosted lounge hours close early- most before 8pm.  So, given that AA137 from Dallas lands at 6:30, it's a tight schedule to get checked in in time to make use of them.  However, if you happen to get there on time, it's a great way to watch the nightly 'Symphony of Lights' laser show that lights up on both sides of the city.

After a quick sleep, we headed back to the HKG airport on the Airport Express.  Since the next flight down to Jakarta was on Cathay Pacific metal, I got to check in at the Cathay 'First Class/OW Emerald' desk, which is actually a row of individual kiosks with personal greeters and assistance.  Very nice, and exactly what you'd expect from a truly top tier airline at their home base.
Up next (of course) was some quality time at Cathay's flagship lounge 'The Wing' for breakfast at the fully hosted restaurant 'The Haven.'  It serves both menu options, and a full buffet.  Hong Kong is one of my favorite cities in the world, the least of reasons why being it's got to be one of the only places where you can get Chinese/English fusion breakfast- congee (a traditional rice soup) with preserved egg, next to baked beans on toast.  As an aside, The Wing is only one of several high end airport lounges available to One World flyers at HKG.  However, it is one of only two that have a true 'first class' section, along with the newly opened Qantas lounge at the other end of the terminal.  The business class side is also quite nice, and has a made to order noodle bar.

Also noteworthy, is the champagne bar, which keeps Veuve Clicquot on ice all day long.  We enjoyed a glass with breakfast (all day is 5PM in airports, remember), and then whipped out the paper cups we'd brought from the AC stateside to get a little 'pre departure beverage' to go.  The CX servers were caught between being horrified at us pouring $70 champagne into coffee cups, and their overly polite CX indoctrination as they watched us do it, and tried to ignore our blatant bad manners.  The sweatshirt and track shoe 'mileage run uniform' didn't help our case either.

Speaking of departure... up next- the CGK turn, and onto the redeye up to Tokyo.